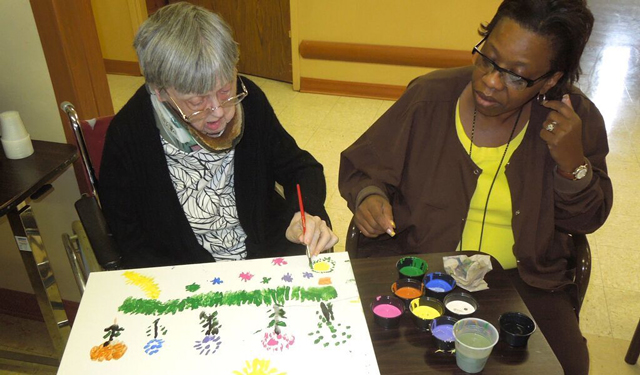 Often families express concern about understanding behavior changes that the Alzheimer’s patient exhibits. Families will often ask whether or not the patient’s behavior is related to the disease, i.e. “Is the disease doing it or are they upset with me?” I will attempt to explain some of these changes based on my experience and educational knowledge.

Alzheimer’s is a disease of the brain and does affect behavior. When families and caretakers do not understand this, negative reactions occur, often expecting too much from the patient. I have seen families become angry because they believe the person is consciously choosing to have their behaviors, rather than understanding the behaviors are a result of the disease.

Some of the symptoms related to the disease are language and visual perception abilities – related to how a person understands what they see.

Conversational speech, or language output sometimes are impaired. Word finding is a common symptom – having difficulty remembering the names of common objects or body parts. They know what it is, but can’t get it out. They take a long time to get their point across because they can’t remember the specific word they need. Another problem with this is that you have a problem understanding what they mean because they are not able to explain. This is directly related to the changes in the brain.

Other language problems are problems getting the correct words out. One is saying a word that is close to what they mean, but wrong, such as referring to their wife as their mother. What he has is an error in what he wants to say. Mothers and wives are closely related, but he has chosen the wrong word. Even though he may know it, he sometimes can’t correct it, and often will become upset with you because they think they are saying the right thing. This can cause the patient to become so frustrated that they decrease their amount of communicating, even though they are able to speak. Other times, a patient can become completely mute, not by choice, but as a result of the disease.

Another problem with language is the comprehension of the spoken language. Often the patient is perceived as having hearing problems; however, this is not always the case. Their problem in not understanding the language, but their ability to understand what is being said to them may be limited.

So yelling or raising our voices does not help – in fact it can cause negative reactions. Some patients can speak fine, but are unable to comprehend language at all. Some patients may be able to comprehend the language, but not able to speak. Some can have either or both problems, or various combinations. These behaviors again, are related directly to the changes in the brain.

These problems do not mean that their eyes are bad. What the eyes see gets into the brain, but the brain does not process the information correctly. These are called visual/perceptual abilities.

One problem is poor localization in space. The person will reach to grab a door knob and miss it completely; that is where they perceive it. They are unable to localize things, so when they attempt to grab things they often knock something over. Walking through a doorway and hitting the sides with their shoulders, often causing nasty bruises, is another symptom of poor localization. Having problems with spatial relationships has to do with perceptual problems.

Problems with direction and distance are also related to this. Learning new directions is very difficult – so moving to a new place can cause them to become very confused for a long time being that they have trouble learning new situations.

According to Dr. Robin Morris, PhD, Neuropsychologist, “part of the visual/spatial problem may have to do with only half a space. They may never even be aware of things on their left, and this may be another reason the person walks into the corners of doors. They just do not attend to things very well sometimes on the left side of space (or right). This can also have an effect on their attention. So if you talk to them on their left side, they may not listen very well. It’s not that they aren’t listening, they just don’t attend to things in that part of the environment, but if you move to their right side, sometimes they will listen.”

These are a few of the behavior changes that are a result of Alzheimer’s Disease and different people will show various combinations of these or different ones. The disease affects everyone differently and as the disease progresses other behaviors can come into place.

Our staff on the Alzheimer’s Unit sees these above mentioned behaviors often and is aware that they are a result of the changes in the brain. Our staff is trained to support our patients through these changes and continue to maintain their dignity.