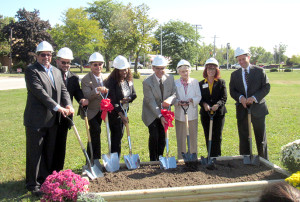 As the morning turned into the afternoon the sun shined brightly and the weather was beautiful and calm.  Generations at Applewood was celebrating a new chapter – the groundbreaking of its $13.5 million dollar renovation and expansion.

Guests were welcomed by Generations at Applewood staff who were excited to show the display of renderings of the future look of Generations at Applewood.  As guests mingled they enjoyed a variety of appetizers, wraps, and delicious desserts while listening to soothing jazz music from the band Euphony.  All guests were special but there was one whose history exceeded all.  She was a bright light and everyone wanted to stop and talk to Roseann Janser.  Roseann Janser is a nurse who was present at the original groundbreaking.  She admitted the first patient to Applewood in 1968 and spent the next 32 years delivering care to the residents.

The ceremony started with the VP of Business Development Julia Jacobs welcoming all guests to the momentous occasion.  Pastor Matthew Troester of St. Paul Lutheran Church gave a thought provoking invocation and remarked how Generations at Applewood means so much to the community.  Partner Michael R. Giannini remarked, “Today, this groundbreaking signifies our continued commitment in serving like Matteson’s forefathers as good residents in keeping with its long standing growth and tradition.”  After Giannini, the administrator of Applewood Dianne O’Connor spoke of how much this renovation means to her, her staff, her residents and the community.  For Dianne it is more than shiny new floors or a new rehab wing, it is about being able to help more people in the community.   Following Dianne, Shelia Chalmers-Currin spoke on behalf of the Village of Matteson President Andre B. Ashmore. State Senator Michael E. Hastings stated, “If you live in the south suburbs- Applewood is the place you want to live,” he remarked.  Lastly Representative of the 38th District (D-Olympia Fields) Al Riley spoke passionately about what touched his heart while listening to the presenters, “I heard today about the residents- not about the building but the residents who live here and the care that is given and that is what is important.”

The ceremony concluded with hard hats and shovels as our special guests broke ground on construction at Generations at Applewood.  The renovation and expansion will include 30 private suites, adding 30 additional beds. It will also include an internet café, ice cream parlor, expansive private dining and two story volume ceilings throughout.  A state of the art rehabilitation room with advanced therapy equipment will facilitate a residents’ recovery and return home.  In addition to the expansion, the existing property will see extensive renovation. Let the new chapter begin!

To see more pictures of the event visit our Facebook page.