At Applewood, activity director Tiffany M. and the residents have invented their own dice game, which Tiffany titled “Roll a Pizza.” The game involves oversized dice, mounds of felt cloth material and a complete dependence on luck…most of the time. 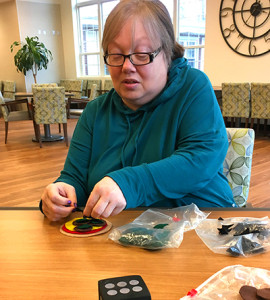 In Roll A Pizza, residents gather at a table and take turns trying to build a “pizza” out of colored bits of felt material; whoever assembles their crust, sauce, cheese, pepperoni, green peppers and sausage the quickest triumphs. Each piece of material (a circular, tan mat symbolizes the crust, a smaller red circle represents the sauce) corresponds to a number (1 for the crust, which is the first ingredient a real pizza is built on, 2 for sauce, 3 for cheese), and the players roll the dice in hopes of coming up with the number of the ingredient they need next. As the game begins, each tries to roll a 1 to grab a crust; those who do then shoot for a 2 for sauce, then a 3 for the small, yellow circle of cheese. The players keep rolling until one has stacked all six of their pizza’s pieces.

“Some will cheer for each other, and say ‘You need such-and-such a piece, you can get it here,’” Tiffany noted.

And this is uncommon, but…sometimes a player might use a display of “skill” to manufacture the number they need. Tiffany has seen residents simply place their die on the table with the digit they need facing up; others will “roll” by gently flicking the die’s side, flipping it over one corner, so it “lands” on the outcome they desire.

Monica G., an Applewood resident since 2011, boasted about her infraction-free playing record.

“It’s a game I enjoy,” Monica said. “I like getting involved with the activities.”

She is also fond of bingo, and noted that she and Applewood receptionist Kathy W. sometimes travel together to a bingo hall in nearby Hazel Crest — from which Monica recently brought home $8 in net profit.

There is no cash at stake in Roll a Pizza, but winners do haul in a variety of prizes. And Tiffany said the homegrown competition can do more for some players than just amuse them for an hour.

“It helps them with memory, and spurs conversation about family members,” the activity director said. “We’re drawing out ideas, and getting them to reminisce.”